We’re almost mid-year, and at FUN Token another exciting quarter is behind us. We want to update our present and future community members about what we have achieved, what’s to come, and our vision for the future.

Freebitco.in and its massive number of users have widely embraced the FUN token. With more than 50 million registered users, adoption of FUN as a premium benefit is progressing very well, and over 1.369 billion FUN have been locked by Freebitco.in users over the past 6 months. Additionally, the token is used across multiple gaming sites and traded on significant exchanges, such as Binance, Uniswap, Gate.io and HitBTC, with more in the pipeline.

In Q1 we released XFUN, a new Polygon layer 2 token that is better, faster, cheaper to transact with, and equally valuable as the FUN token. This was launched alongside an entire suite of XFUN products, including a wallet incorporating an exchange mechanism and a new casino.

FUN is based on Ethereum and XFUN on Polygon to provide a seamless experience for our users. The FUN token remains the main tradeable asset, with the new XFUN Token being the utility token in our ecosystem. It offers speed and scalability for iGaming users.

The XFUN Wallet is a non-custodial wallet and a core component of our decentralized ecosystem. The Wallet supports FUN and XFUN and major coins and other tokens such as Bitcoin, Matic and Ethereum. It incorporates a bridge between FUN and XFUN which lets users swap with a 1:1 ratio when changing XFUN to FUN and vice-versa. It also supports the Wallet Connect standard supported by many decentralized applications with some enhancements to add registration and KYC to the user experience (these are delivered ahead of schedule and were initially scheduled for Q3). In the next release we will be adding the ability to store NFTs. 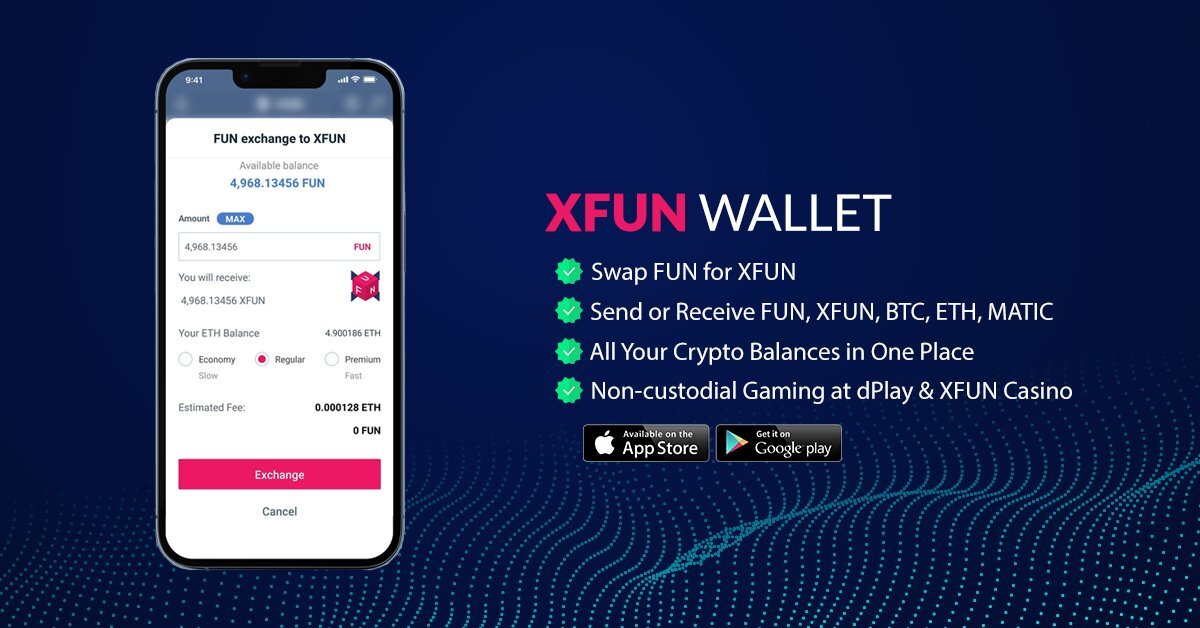 The latest addition to the XFUN suite is the Arcade portal. It has been developed in cooperation with one of the top providers in the hyper-casual, play and earn, arcade, and social gaming vertical: SkillGaming. This top-shelf gaming experience, with over 100 arcade games and up to 4 game modes, brings a new dimension to the XFUN ecosystem. The Arcade portal will appeal to a new demographic of gamers, strengthening the positioning of FUNToken as the go-to Web3 iGaming token with the mission to provide access to all types of betting and gaming content.

Alongside the Arcade portal comes our new mascot – FUNKY – who is the protector of gamers and ruler of the iGaming ecosystem. The launch is planned for early July, and we are genuinely excited to see him leap into action!  This is not on our published roadmap.

Next on the list on our roadmap is the latest of the XFUN suite – NFTs. We’re developing NFT prizes and airdrops that will be available through our platforms. FUNToken NFTs will support the umbrella VIP scheme across all our brands, providing special offers and unique experiences to FUNToken most loyal and engaged users.

As far as the metaverse is concerned, there is a lot going on in that space, in terms of potential applications and providers. We will continue to assess the space and move where appropriate, but as our first foray into metaverse, the team is currently giving the final touches to its FUNToken penthouse in Las Vegas, acting as a showroom for the brand and a place to hold meetings and VIP gatherings. In addition, FUNToken entered into a strategic partnership with pax.world, with the shared vision to offer a fully decentralized on-chain gameplay experience in the metaverse.  pax.world will launch as a serious metaverse in a few months (we have seen the pre-release product) and we are excited to be working with them building out our gaming operations in this new style.

FUNToken is a global token. An ambitious localisation effort is a crucial component of our strategy to reach all gamers worldwide. It is no surprise that the first language to be added to the ecosystem will be Spanish. Freebitco.in and DPlay are already getting significant traffic from countries where Spanish is the native language. With more than half a billion speakers globally, it is an obvious choice to boost FUNToken adoption.

Additionally, XFUN will be added to Freebitco.in. While expected in Q2, this enhancement is slightly delayed and will be released in a rolling release by the end of July 2022.

Q3 promises as always to be busy with third-party operators adopting the XFUN platform. We will also roll out lay staking on DPlay, a new sportsbook, and the addition of NFTs to the Wallet.

As per our commitment to the community on July 1st we will be carrying out the quarterly burn of half the net profit generated by our gaming operations in the preceding quarter. There will be a separate announcement about that tomorrow.

We are excited about the busy launch schedule in the coming weeks, and the launch of XFUN Arcade. With the XFUN Token and the XFUN Wallet upgrade, we have laid solid foundations to build our vision of a decentralized Web3 iGaming solution. We look forward to releasing our first NFTs and revealing more detail about the metaverse shortly. Last but not least, we’re also working on FUNCampus, another initiative to accelerate FUNToken adoption, in a fun way.

It will be a hot summer for the FUNToken team and the entire Web3 iGaming community.